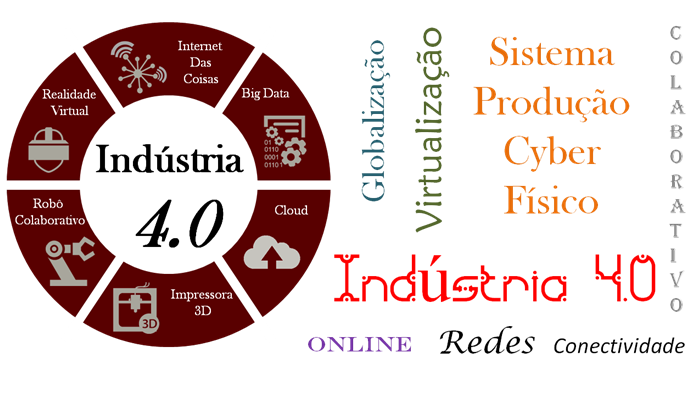 The industry 4.0 theme has become the subject of the moment. If the first industrial revolution brought mechanization, the second offered electricity and serial production systems, along with the third one we had the born of internet, computers, electronics, robotics and automation. The fourth industrial revolution is bringing the connectivity and digital, the "online" is present in every aspect.

Collaborative robots, drones, 3D printer, digital manufacturing, big data, cloud, autonomous cars, internet of things, virtual reality, these and many other subjects do not stop to be commented on networks. To get an idea of the importance of this theme, this year, the fourth industrial revolution is featured in the World Economic Forum in Davos.

Nobody disagree that technology is advancing at a staggering speed, as already predicted by Moore's Law. Today we are all networked and interconnected in some way, the online word may well define the changes we are experiencing. The number of smartphones, information and data generated, availability of content anytime, anywhere, all this has shaped the society in which we live.

On the one hand, the technology has evolved and proved to be a great ally for the amenities and human development, as well as for industry, what are the social, cultural and economic impacts of this technological acceleration? Who in fact is prepared for this new industrial revolution?

The transformation brought about by the 4.0 industry involves numerous adaptations for industries that want to evolve to this new paradigm, among which we can mention:

In general, industries that are talking about migration to the 4.0 industry are those that have experienced at least 10 years of third industrial revolution, in other words, they already have well grounded these concepts and practices in their daily activities. It almost impossible for an industry that knows nothing about automation and robotics jump into this new revolution.

Analyzing the scene of the industry, we have the large, medium and small businesses competing for space in the economic market. If we ponder the industrial evolution to the scene of each one of them, we can say that on average the reality of today's industry is the location between the second and the third industrial revolution. This is because only a small portion is experiencing the benefits with the third industrial revolution and can see some possible steps to the industry 4.0. The largest portion, small and medium-sized enterprises, are still experiencing the transition between the second and third revolution, many of them have a lack of automated processes and / or robotic in their work routines, so little has the structure to support this new transformation.

Companies that are already on the market, even large companies, are facing difficulties in adapting their systems to fit the changes imposed by this new evolution. Truth be told, the greenfield businesses can more easily adapt to changes imposed by industry 4.0, as they can be build already immersed in this new concept.

Studies show that many jobs are generated by small and medium enterprises. Other ones show that by 2020 almost everything will be digital. However, the scenario seen today is that only a little proportion of small and medium-sized companies have adopted technologies to become digital. How to prepare the transition of these companies? How can they remain competitive in the market and continue creating jobs?

In addition to this factor, another crucial point is the existing gap between academy and industry. This disparity is becoming ever greater, if there is no alignment between this both worlds, professionals for this new emerging reality will become increasingly scarce. This will create a dilemma where there will be a large number of jobs vacancies available and at the same time a great rate of unemployment for lack of qualification. How to prepare the next generation of workers to this new scenario of the industry?

I believe these questions should be studied carefully, so that you can map out a strategy to enable this transition in order to suit the necessary changes in each of industries, making it possible the migration for this new trend. All this must be thinking to minimize the economic, social and cultural impacts during this route. Truth be told, the fourth industrial revolution is present and is a path of no return, companies that adapt will be those that remain in the market and leave the competition behind